Interactive effects of predation, plant quality and herbivore movement on the success of the purple loosestrife biocontrol program 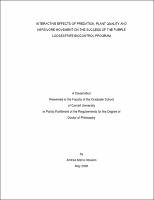 The leaf-feeding beetles Galerucella calmariensis and G. pusilla, introduced as biocontrol agents of the invasive purple loosestrife, are usually highly effective in controlling purple loosestrife. However, at certain sites the insects fail to attain outbreak populations, possibly due to the interaction of predation and flooding regime. Predator exclusion experiments indicated a positive effect of flooding on leaf-beetle survival for all developmental stages, while predator exposure had little effect. The effect of predation did not vary between regions with successful and lack of purple loosestrife control. Purple loosestrife plants grown in flooded soils had higher water content and lower tannin concentration than plants grown in well-drained soil, likely indicating that flooding improves purple loosestrife nutritional quality for leaf-beetles. Dispersal behavior may also affect leaf-beetle dynamics and hence purple loosestrife control. The effect of matrix habitat, isolation and plant damage on leaf-beetle movement was evaluated through a mark-recapture/resight experiment. Leaf-beetles were more likely to colonize purple loosestrife patches embedded in meadow than in forest habitat and they preferred previously attacked purple loosestrife plants over un-attacked plants, especially in the forest habitat. Movement of both species was similarly affected by matrix type, but G. pusilla recaptures were always higher than G. calmariensis. Additionally, I used a mark-recapture study and a spatially-explicit simulation model to evaluate the effect of host-plant damage and distribution, and presence of conspecifics on the dispersal behavior of Galerucella spp. In the field, leaf-beetles preferred purple loosestrife plants that had been previously attacked by conspecifics. A factorial simulation experiment with degree of host-plant aggregation and insect density as factors revealed that mean dispersal distances were lower in the least aggregated landscape, but were not affected by insect density. Dispersal kernels for all cases were fat tailed but kurtosis was higher for the least aggregated landscape. Overall, our results indicate that environmental disturbances such as flooding and landscape features such as matrix habitat mediate Galerucella?s interactions and behavior, leading to variations in their survival and distribution. Biotic and abiotic interactions of biocontrol agents in the introduced range may influence the success of a biocontrol program and should be considered in management.