Characterizing Microbial Population Dynamics During the Initial Stages of Composting 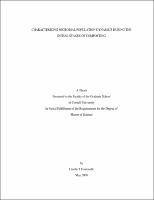 Composting is a solid state fermentation process that employs the use of complex relationships in microbial communities for the degradation of organic matter. By studying the process of composting, solid state fermentation, as a process may be better understood and characterized for the development of models in predicting scale up behavior. In addition, the study of compost microbial community provides essential information about the microbial community evolution and how this evolution drives changes in physical variables such as temperature, pH and oxygen concentration. In this study, 3 reactors were designed and built to a working volume of 50L. Each reactor was equipped with 7 axial sampling ports up to a height of 0.7m above a perforated plate used to hold the substrate bed, with a 10cm interval between ports. The reactors were loaded with a mixed substrate of dog food and switchgrass with a C/N ratio of 15/1, with each reactor being started off at different moisture contents: 70%, 65% and 60% moisture content wet basis. This is accomplished by keeping a constant dry weight for the substrates and varying the volume of water added. The reactors were then allowed to run for at least 96 hours. Temperature and effluent gas concentrations were monitored online for the duration of the process and at pre-defined times, samples were collected and analyzed for pH using a pH meter, moisture content using oven drying and yeast, bacteria and fungi content using probe hybridization. The results showed that moisture content is a key factor in determining the microbial community evolution, with the highest moisture content reactor generally producing the largest amount of detectable microbial DNA initially and at most points throughout the process. The temperature, effluent gas and pH profiles were also consistent with the trends observed for the microbial community data. Furthermore, it was observed that fungi were detected at all sampled points during the process, suggesting that fungi play an important role in the composting process.