An Economic Analysis of the Perpetual Emigrating Fund 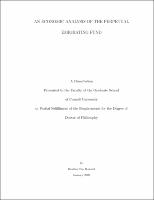 Passage money sent from America to relatives and friends still at home replaced indentured servitude as the main source of external financing for emigration to America in the early nineteenth century. Members of The Church of Jesus Christ of Latter-day Saints (Mormon) formalized prepaid passage under the Perpetual Emigrating Fund (PEF). The PEF provided loans to Mormon emigrants in the form of prepaid passage to Utah. Roughly thirty percent of all Mormon emigrants from the British Isles received PEF loans prior to its dissolution in 1887. At the time, universal emigration was official Mormon policy, so convert baptism also indicated intention to emigrate. This research creates a sample of 2,250 Mormon household heads who emigrated from the British Isles to Utah, 1854-1885. Information is gathered from the Mormon Immigration Index, financial records of the PEF, and the Minnie Margetts index to early Church membership records. In compiling the household head sample, multiple data collection techniques are employed: manual transcription, optical character recognition software, and probabilistic record linking. Loan receipt and the time lag between baptism and emigration are used to analyze the interplay of prepaid passage and the timing of emigration using a simultaneous equations model. Analysis of loan size is further estimated using an IV Tobit model. As expected, household heads with skilled occupations tended to emigrate more quickly than those with unskilled occupations, though the relationship was not linear. PEF loan receipt hastened emigration for unskilled borrowers and women, but it lengthened delays for skilled and semi-skilled borrowers. Loan allocation was based primarily on how long the family had been waiting to emigrate. The number of workers in the household age 15 and older also had a positive impact on loan receipt. Time series estimation is used to investigate the relationship between economic conditions and annual Mormon emigration from the British Mission, which varied from 86 to 2,431 persons per year in 1855-1895. Time series data are transcribed from original manuscript administrative records of the British Mission. Higher income in Utah is associated with higher emigration rates, while higher income in England is associated with lower emigration rates. Surprisingly, there is no discernible effect for the British employment rate. Increases in the size of the PEF annual fund also tended to increase emigration rates. Analysis confirms that Mormon emigrants responded to economic conditions, despite the presumably religious motivations for emigrating. Taken together, the household-level and time-series analysis paints a comprehensive picture of the impact of the PEF on Mormon emigration. Financial assistance hastened emigration at the household level and increased overall emigration at the community level. These results expand the literature on nineteenth century prepaid passage. To the extent that family lending continues today, these results may have important implications for consideration of family ties in modern immigration policy.