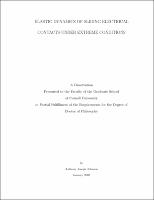 The goal of this dissertation is to explore the effects of structural deformations on high speed, high current density, sliding electrical contacts. The specific technologies studied in this body of work are the the homopolar motor and electromagnetic launcher, with an emphasis towards the latter. The coupled motion of the guide rails and armature of an electromagnetic launcher are modeled by a Timoshenko beam on an elastic foundation. Using reduced order finite element simulations, it is found that elastic waves are generated in the guide rails. These waves are radiated from the armature when it passes through a characteristic wave speed of the rails called the critical velocity. The critical velocity depends on the stiffness of the foundation and is below the bar and shear wave speeds. It is found that as the armature accelerates beyond the critical velocity, the magnitude of the stress in the rails can reach values beyond the yield stress of the rail material. It is also shown that the contact pressure between the armature and guide rails is changed dramatically by the presence of the stress waves in the guide rails. The changes in the contact pressure are significant enough to cause interruption of the electric current and potentially damage the rails or armature. Experiments show that the reduced order computational model captures much of the dynamics of the rails during launch. The presence of elastic waves and the phenomena associated with a critical wave speed are verified experimentally using a fiber optic strain system that is insensitive to electromagnetic interference. Many of the wave effects seen in the simulations are seen in these experiments. This includes the transition from quasi-static deformation states to wave radiation states at the critical velocity. Other effects shown in the experiments are wave reflections, strain amplification and jerk effect waves. There is also experimental and theoretical evidence for a lateral instability of the armature as it rides along the guide rails. For electrical contacts in homopolar motors, it is found that structural deformations of the brush fibers can affect the ability of the brushes to conduct electricity by changing the resistance of the contacts. This can affect the performance of the motor and may contribute to the wear of the brushes. Large variations in the structural properties of different commercial brushes are found and it is conjectured that the electromechanical measurements in this dissertation could be used as a quality control test for the large number of brushes necessary for the full-scale motor. A statistical model for these brush deformations is also developed and compared to the experimental data. It is found that the model can be made to fit the experimental data, but more brush samples and a controlled atmosphere would be needed to verify this model.