Climatic impacts on ocean ecosystems: A study of climate variability and conservation oceanography 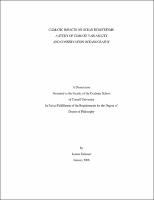 Impacts of climate change on ocean ecosystems occur globally, affecting all components of the ecosystem, from the physical environment to the biology. The Mediterranean Sea was chosen to study climate variability in the physical environment, while from the biological environment, the endangered population of Northern right whales (Eubalaena glacialis) was selected to study its sensitivity to different food availability scenarios. An introduction and explanation of the relevant issues relating to the Mediterranean Sea and of the salient points of ocean ecosystems and whales are presented in Chapter One. Our results indicate that the entire Mediterranean Sea has undergone an increase in temperatures with a leveling-off observed in the second half of the record (Chapter Two). This warming in the Mediterranean, which is almost double that of the global oceans, occurred at both multidecadal and interannual time scales and it is driven primarily by changes in annual net surface heat flux. We also show that survival and reproductive rates of northern right whales are dependent on food availability (Chapter Three). Under high food availability, the right whale population continues to grow into the future. However, when food availability is low, the population declines, the calving interval increases significantly, and the population will go extinct in the next three decades. However, protecting just one female out of 100 whales every year when food concentrations are low can help the population grow and avoid extinction. We conclude in Chapter Four that it will be valuable to investigate future trends in climate variability in the Mediterranean to determine whether the recent leveling-off of temperatures represents a brief respite from a persistent warming or a new direction for the Mediterranean. Current conservation oceanography efforts should take into consideration the relationship between the whales and the variabilities of their food sources, and should attempt to maintain mortality rates as low as possible, if we are to save the right whale population from extinction. Overall, we need to understand the causes and sources of climate variability, in order to be able to make the hard decisions necessary to diminish anthropogenic impacts on global ocean ecosystems.