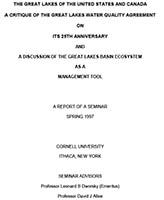 This report has two objectives. The first is to provide a critique of the Great Lakes Water Quality Agreement of 1972 between the United States and Canada on the 25th anniversary of the Agreement The broad purpose of that agreement is to protect and conserve the physical, chemical and biological integrity of Great Lakes waters within the context of an ecosystem approach to safeguard the public health and welfare of the people of both countries. A second and equal objective is to re-establish a deeper understanding and appreciation of the responsibilities of the Governments of Canada and the United States under the Boundary Waters Treaty of 1909 on the 88th anniversary of that Treaty.

Dworksy, Leonard B. and David J. Allee. "The Great Lakes of the United States and Canada: A Critique of the Great Lakes Water Quality Agreement On Its 125th Anniversary and a Discussion of the Great Lakes Basin Ecosystem as a Management Tool. Report of a Seminar." Cornell University, Spring 1997.