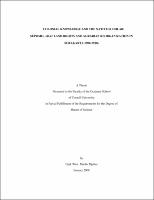 In this thesis, I analyze how a native scholar was an active agent in constituting colonial discourse on native land rights. Specifically, I examine a doctoral thesis written in the 1920s by Supomo, a young Javanese aristocrat and a colonial judicial officer studying in Leiden University. The thesis examined adat land rights and agrarian reorganization in Surakarta, Central Java. In the 1940s, Supomo contributed to writing Indonesia's 1945 Constitution where his conception of adat and the state was institutionalized. Thus, his influence continues to reverberate in contemporary Indonesia. I propose that an internally fractured and multifaceted colonial discourse, particularly enticing in its civilizing appearance, made Supomo ambivalent in his relationship to colonial knowledge and to his mentor, Cornelis van Vollenhoven. I further suggest that his ambivalence was a form of resistance, manifested in his capacity to both mimic the colonizer's technology of rule yet also challenge some of its underlying premises. In other words, Supomo was a native scholar whose ambivalence expressed a peculiar mode of resistance and engagement with colonial knowledge. I conclude by arguing that in addition to recognizing the epistemological claims of colonial knowledge, we must also recognize the capacity of a native scholar to identify and resist hegemonic arguments that often are concealed in complex colonial discourses.