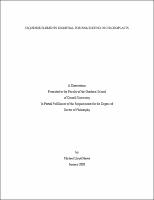 Organellar transcripts of angiosperms contain cytidines that are specifically edited to uridines. Almost all editing events lead to the restoration of a codon for a conserved amino acid instead of one predicted from the organelle genome. The sequences immediately surrounding an edited C are required for proper selection of the C target. There is no single consensus sequence near all known editing sites in a plant species, suggesting that different sequences are required to edit different C targets in plant organelles. However, chloroplast sites can be grouped into clusters of two to five sites that share similar sequences within 30 nt 5? and occasionally 30 nt 3? to the C target of editing. The importance of nucleotides proximal to two tobacco chloroplast editing sites was investigated in vivo and in vitro. A site in rpoB was chosen for analysis because sequences around the C target are shared with two other sites. In order to determine the nucleotides critical for editing, an in vitro chloroplast editing assay was developed with chloroplast extracts from multiple plant species. Using this in vitro assay, the essential sequence elements for editing were delimited to a region containing sequences of rpoB that are shared with two other editing sites. Wild-type substrates were edited to a greater extent in vitro compared to substrates with nucleotide differences in the common sequences. Because substrates containing a site in the psbE gene were efficiently edited in vitro, the nucleotides surrounding this C target were also thoroughly analyzed. A 6 nucleotide motif was discovered to be necessary for editing. The precise distance between a proximal cis-element and the C target was found to affect selection of the proper C. Unlike the common sequences around the site examined in rpoB, the 6 nt essential cis-element was not present around other known editing sites. The motif is commonly present in species that have a homologous editing site in psbE, but is less frequently present in plants that have a genomically encoded T at the same position. Therefore, it is likely that the crucial motif has co-evolved with the editing site.