Dynamics and Trajectory Optimization of Morphing Aircraft in Perching Maneuvers 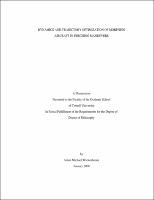 Advances in materials, actuators, and control architectures have enabled new design paradigms for unmanned aerial vehicles based on biological inspiration. Indeed, there has been a recent drive to design aircraft features and behaviors based on those of birds, insects, and flying mammals. This dissertation focuses on one such bio-inspired maneuver, perching, which can be described as a low-thrust, aerodynamically controlled, planted landing. While planted landings are possible in helicopters and jump jets, it has yet to be achieved on a low-thrust, high-efficiency platform such as a long loiter reconnaissance aircraft. It is proposed that in-flight shape reconfiguration can enable this class of aircraft to execute this maneuver without sacrificing its cruise performance. This dissertation discusses the perching problem at various levels, from the aerodynamics of the wing to the complete trajectory of the maneuver. A lifting-line technique, a variant of Weissinger's classical method, is developed to analyze the aerodynamics of morphing wings in the attached flow regime. This tool is used both to study the effects of morphing on a wing's loading and to populate a database of aerodynamic coefficients for simulating the perching aircraft. Thusly, the aircraft is simulated in the longitudinal plane and compared to a similar fixed-configuration aircraft. Trim and stability analyses are performed on each aircraft in order to clarify the effects of morphing on the aircraft's longitudinal dynamics. Finally, viable perching trajectories, which bring the aircraft from a cruise configuration to a planted landing, are developed and optimized in terms of their spatial requirements. Three classes of aircraft are simulated in this optimization study: point-mass, fixed-configuration (i.e. conventional), and morphing aircraft. Comparisons of these classes show that fixed-configuration aircraft are limited by their pitch maneuverability, whereas morphing can alleviate these limitations by increasing the available pitch authority. It is concluded that morphing increases pitch controllability during the maneuver while simultaneously decreasing the spatial requirements of the perching maneuver.