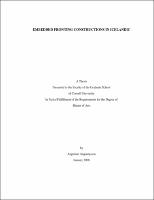 In the two papers presented here, I deal with fronting constructions in Icelandic, in particular Subj-Adv-Vfin order (V3) and stylistic fronting (SF) in embedded clauses, and I compare Icelandic fronting with that found in other Scandinavian languages. The first paper, Verb-third in Embedded Clauses in Icelandic (to appear in Studia Linguistica), is a survey of the possibilities of having V3 order in Icelandic embedded clauses, namely the order where the finite verb follows a sentential adverb (like negation for instance). It is shown that although this order is possible in most types of embedded clauses in Icelandic, it is severely restricted and heavily marked. It commonly requires an extra stress on the adverb and it is frequently more acceptable if the subject is an unstressed pronoun. The naturalness of the order also depends on the type of embedded clause involved, being most natural in relative clauses and indirect questions introduced by a wh-pronoun but least acceptable in that-complements. It is argued that the proper analysis of this order in embedded clauses in Icelandic involves exceptional adjunction of the adverb in question to the TP instead of the usual VP-adjunction of such adverbs. Thus it is maintained that the Adv-Vfin order in these clauses is not due to exceptional lack of V-movement in Icelandic but rather to exceptional AdvP-adjunction. In the Scandinavian languages, on the other hand, the V3 order in embedded clauses is argued to be best analyzed as lack of V-movement (lack of V-to-I), as usually assumed. The paper follows the analysis proposed by Bobaljik and Thrainsson (1998) in relating this difference between Icelandic and (Mainland) Scandinavian to the presence vs. absence of a split inflectional phrase. In the second paper, Stylistic Fronting as Head Movement, I claim that what has been called Stylistic Fronting in recent approaches (Holmberg 2000, Hrafnbjargarson 2004) is in fact a result of three different processes: (i) head adjunction to the finite verb, what I call SF, (ii) topicalization of maximal projections and (iii) adjunction of adverbial phrases to TP in a split IP-domain, i.e. the same structure as I propose for embedded V3. SF, in my terms, has no semantic effects but the SF-like elements in the other fronting constructions commonly receive an extra stress. I reject the common assumption that every time some element gets fronted in a clause with a subject gap it must be an instance of SF, and I claim that the bar-level and the discourse function of the moved element is the distinguishing factor between SF and other fronting processes. Interestingly, the conditions for these processes depend on the type of the embedded clause. SF is most common in relative clauses and adverbial clauses, although it occurs in all types of embedded clauses with a subject gap (cf. J?nsson 1991). Topicalization is most natural in complement clauses but it is difficult or impossible in relative clauses and indirect questions with a wh-pronoun (cf. Magnusson 1990). AdvP-adjunction occurs in relative clauses and adverbial clauses and it has striking similarities to the V3 order discussed in the first paper. Under my analysis, both SF and V3-like AdvP-adjunction depend on V-to-I movement in Icelandic (embedded topicalization only does so to a certain extent). I argue that the different word order conditions within different types of embedded clauses, unaccounted for in earlier analyses, is due to the presence or absence of a trace in Spec-AgrSP and different degrees of V-to-I movement (V-to-T vs. V-to-AgrS).