Visuomotor Optimality and its Utility in Parametrization of Response 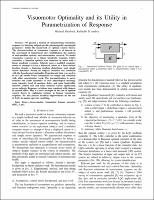 We present a method of characterizing visuomotor response by inferring subject-specific physiologically meaningful parameters within the framework of optimal control theory. The characterization of visuomotor response is of interest in the assessment of impairment and rehabilitation, the analysis of man-machine systems, and sensorimotor research. We model visuomotor response as a Linear Quadratic Gaussian (LQG) controller, a Bayesian optimal state estimator in series with a linear quadratic regulator. Subjects used a modified computer mouse to attempt to keep a displayed cursor at a fixed desired location despite a Gaussian random disturbance and simple cursor dynamics. Nearly all subjects' behavior was consistent with the hypothesized optimality. Experimental data was used to fit an LQG model whose assumptions are simple and consistent with other sensorimotor work. The parametrization is parsimonious and yields quantities of clear physiological meaning: noise intensity, level of exertion, delay, and noise bandwidth. Inferred control cost and noise intensity varied significantly across subjects. Response variations were consistent with changes in exerted effort. This is a novel example of the role of optimal control theory in explaining variance in human visuomotor response. We also present technical improvements on the use of LQG in human operator modeling.