Ideology and Social Position in Poland: The Determinants of Voting for the Right, 1991-2005 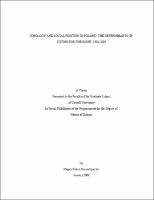 This study examines voting and ideology among unemployed and low-income groups in Poland from the period of 1991 to 2005. In the years immediately following the Communist overthrow, many Poles believed that market reform would bring social and economic stability to their turbulent country. In parliamentary elections throughout the early period, voters alternated between electing centrists and social democrats, who offered different policy options on domestic socio-economic issues, but supported the neoliberal macro-economic program of privatization and deregulation. However, in the most recent election, a coalition of right-wing parties campaigning on platforms of conservatism and Catholic nationalism easily came to power under economic circumstances of extremely high unemployment which the outgoing Social Democratic administration had been unable to ameliorate; the Right?s economic stance is rhetorically more populist but does not challenge the basic market reform program. This study looks at voting behavior of Poles through all of these elections, in order to determine what parties have drawn their support over time, and what political ideologies have accompanied their votes during the same periods. I initially predict that, in the absence of state control over macro-economic conditions, the Right has provided an ideological scapegoat to unemployed and economically marginalized voters: its brand of traditionalism and nationalism directs inchoate anger in a very concrete way towards markers of encroaching cosmopolitan Europeanism. I theorize that these ideological themes have been historically consistent organizers of Polish identities, but only recently have become political-behavioral motivators. Through data analysis, I find my hypothesis to be only partially true. My findings support the idea that the Right?s political appeal has become consolidated in recent years around key ideologies (in particular, religious traditionalism, social conservatism, and anti-Communism). But, contrary to my expectations, I find that the more educated?perhaps, the angry middle class?may be the Right?s new constituency in Poland, and not the marginalized.