CARBON NANOTUBE TRANSISTORS, SENSORS, AND BEYOND 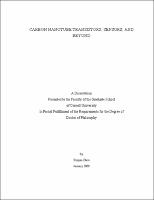 Carbon nanotubes are tiny hollow cylinders, made from a single graphene sheet, that possess many amazing properties. Another reason why nanotubes have generated intense research activities from scientists of various disciplines is they represent a new class of materials for the study of one-dimensional physics. In this thesis we investigate the electrical transport of semiconducting single-walled carbon nanotubes and their potential applications as biological sensors. Electrons have been predicted, by theoretical physicists, to go through nanotubes without much resistance. But this has not been properly quantified experimentally, and the origin of the routinely observed large resistance in nanotubes is not clear. In this thesis we show that in moderate long high quality nanotubes the electrical transport is limited by electron-phonon scattering. Systematic studies are carried out using many devices of different diameters at various temperatures. The resistance and inverse of peak mobility are observed to decrease linearly with temperature, indicating the influence of phonons. The conductance and peak mobility scales with nanotube diameters also, in a linear fashion and quadratic fashion respectively. Based on electron-phonon scattering, a theory model is developed that can not only predict how the resistance changes with gate voltage but also explain the observed temperature and diameter dependence. This work clarifies the nature of electrical transport in nanotubes and sets a performance limit of nanotube devices in diffusive regime. The electrical transport in nanotubes is extremely sensitive to local electrostatic environment due to their small size, large surface to volume ratio and high mobility, making nanotubes ideal key elements in biological sensors. In the second part of this thesis, we integrate nanotubes with supported lipid bilayers, mimic structures of cell membranes, and use this platform as a way to introduce biomolecules into the vicinity of nanotubes for sensing purpose. The quality of supported lipid bilayers near nanotubes is confirmed by probing the diffusion of lipid molecules. Nanotubes do not slow down lipid diffusions, but act as barriers for proteins bound to membrane embedded receptors. The ability of nanotubes to control membrane protein diffusions can be used to study the complex correlation between protein functions and their diffusion properties. Future efforts can be put into modulating the magnitude of nanotube barriers with electrical potentials for deterministic controls. We also demonstrate that the formation of lipid bilayers and the protein bindings on the membranes can be detected by nanotubes as their conductance are changed by those events. The sensitivity of this system can be improved to near single molecule level.