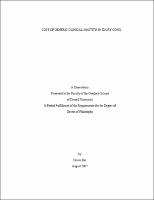 In this thesis a framework for estimating production losses and monetary costs of generic clinical mastitis (CM) was developed and possible applications were demonstrated. Milk Losses were estimated from 5 large, high producing, dairy herds that used automatic recording of daily milk yields by using mixed models, with a random herd effect and an autoregressive covariance structure to account for repeated measurements. Generalized mixed models, with a random herd effect, were used to quantify the effect of CM on mortality and culling. Generalized mixed models, with a random herd effect, were used to estimate the conditional risks for the first 3 CM occurrences. A specially structured optimization and simulation model based on multilevel hierarchical Markov process that included a detailed representation of repeated episodes of CM was used to study the effects of various factors on the cost of CM. The average cost of CM in our study herds was $179. In the basic scenario 92% of the CM cases were recommended to be treated. The estimated cost of CM was highly dependent on cow traits (range: $3-$403), and moderately on exogenous factors. The costs of following sub optimal replacement policies were evaluated, such as a decision to treat all cows with CM or replacing all cows after their 3rd CM case. The cost-benefit of applying two fictitious vaccinations were calculated. Comparing expected net present values obtained from the model for cows with similar traits but differing in CM state and pregnancy status can assist the farmer in making quantitative economic CM treatment decisions. Current information technology as online individual cow milk recording systems and detailed herd management programs enable individual farm estimations in a growing number of dairy farms. The developed dynamic optimization and simulation model with its user interface enables gaining insight into disease costs under farm specific conditions. Such a model can be used by dairy farmers, bovine practitioners, or extension experts to assist in disease management decisions and thus improve the profitability of the enterprise.