Attention Networks: The Effects of Social and Non-Social Cues on Measures of Attention in Clinical Populations 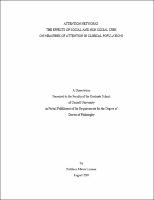 Previous investigations of attention in various developmentally disabled populations have shown attention processes to operate differently than those in typically developing persons. Atypical populations exhibit deficits in the activation and alerting of attention, spatial direction of attention, and resolution of conflict requiring multiple attention mechanisms. While persons with Attention-Deficit Hyperactivity Disorder primarily exhibit deficits of conflict resolution during attention tasks, those with Autism Spectrum Disorders are shown to have impaired abilities to shift attention between locations and modalities. The current study had three primary goals. We 1) examined components of the attention process in typical persons and in persons diagnosed with Attention-Deficit Hyperactivity Disorder to assess the differences in recruitment of attentional components between the three populations, 2) developed a social variation of the widely used Attention Network Task to determine the effects of social cues on the same attentional components in a typical and Autism Spectrum population, and 3) assessed the differences between typical persons and those along the Autism Spectrum using a standard attention paradigm and our social variant of the task. Attention Network Task data obtained from typical persons replicates those reported in previous investigations. There was no evidence of deficits in conflict resolution in our Attention-Deficit Hyperactivity sample using standard task measurements; we thus defined additional calculations to elicit measures of these deficits. We successfully developed a comparable social variant of the attention task. We argue that the Attention Network Task may be inappropriate to use with Autism Spectrum persons to elicit measures of primary attentional components. We also argue that cue and target features of the task do not measure attentional components in the manner currently described in the literature.