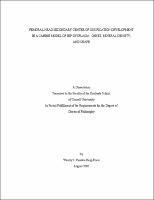 Developmental dysplasia of the hip (DDH) is characterized by joint subluxation, malformation, and early onset osteoarthritis. Little is known about how increased body weight and chronic subluxation affect the course of early postnatal hip development. The objective of this research was to test the association of body weight and subluxation with femoral head mineral density and shape development, and with joint degeneration at early adulthood. A longitudinal study was conducted using a canine model of DDH. Serial body weight, age at femoral head ossification onset, and femoral head coverage at 16 and 32 weeks were measured. Bone mineral density and secondary center of ossification (SCO) shape were evaluated noninvasively using serial quantitative computed tomography at 7 ages between 4 to 32 weeks. Weight and shape analyses were conducted with 34 hips; mineral density analysis was conducted with 28 hips. Degeneration at 32 weeks was assessed using necropsy and cartilage biochemistry. There was a negative association between birth weight and age at femoral head ossification onset; however, the association was likely due to skeletal maturity level rather than body weight per se. Lower birth weight subjects had greater femoral head coverage at 16 weeks. Greater birth weight was associated with greater probability of degenerative changes at 32 weeks. During growth acceleration, greater subluxation was associated with a lower mean SCO density, and, at 32 weeks, with a greater peak density and a greater area of high density subchondral bone in a more lateral location. Subluxation was also associated with a greater probability of degenerative changes at 32 weeks. At 14 and 32 weeks, greater subluxation was associated with a thinner SCO in the perifoveal region, the characteristic site of lesion formation. Increased thinness was associated with a greater probability of degenerative changes. At 32 weeks, greater subluxation was also associated with a greater bend in the SCO lateral to the perifoveal region. These results support the hypothesis that increased birth weight and chronic subluxation during the critical early postnatal growth period are sufficient to alter SCO density distribution and shape during development and result in measurable degenerative changes at adulthood.