THE INDIAN NATIONAL CONGRESS AND ITS SELF-REPRESENTATION TO THE COLONIAL STATE: TRACING A DISCURSIVE STRATEGY'S REIFICATION FROM THE ARCHIVE TO THE SCHOLARLY ACCOUNT 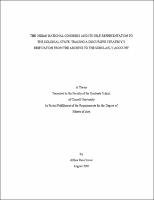 This thesis examines the Indian National Congress (INC) in the period prior to India's independence from Britain. Over the course of the pre-independence period, the British government in India tolerated the INC, with varying degrees of restrictiveness. Despite legal and societal changes in its ability to operate, the Congress displayed a remarkable degree of consistency in the type and content of its publications, with its central publications never ceasing to be produced. The Congress's openness and transparency with regard to its publications constituted an implicit argument that it was a orderly and rational organization, fit to succeed the British Raj. This project is structured around a series of questions about the INC's discursive strategy: 1) What is the party accomplishing when it is representing itself to the colonial state? 2) Is the INC's self-representation strategic, and does it change as the organization's goals change? 3) How do the INC's pre-independence discursive relations with the colonial state shape the party's legitimacy in the transition to an independent India? The answers to these questions lead me to contend that the way the party represents itself through published sources forced the colonial Government of India to encounter the party on the party's own terms. Because this move on the part of the INC has become embedded in the archival record, it has shaped subsequent analyses of the INC. The analysis of the post-independence political context, therefore, benefits from an understanding of the ways that the INC's early self-representations are reified in the secondary literature about India's most historically prominent political party. In contrast to traditional accounts of the Congress tend to focus on either its mass character or its elite leadership, I consider the Congress's relationship with the Colonial state. In my analysis of the ways that the INC's textual culture constituted its self-representation, I contend that texts about and by the Congress became the foundation for a dialogic relationship with the colonial state which became embedded in the archive. This text-based dialogue has shaped subsequent scholarship on the Congress into a nationalist mode of analysis. By tracing the origins of dominant scholarly accounts of the INC to the organization's own dialogue with the colonial state, I argue that study of the INC is often segregated from potentially useful modes of historiographical or social scientific analysis. Methodologically, I utilize a multi-disciplinary approach, arguing that both historical-institutionalist theory and discourse analysis are useful when studying this instance of the Congress's activity. I also argue that such an approach is vital when considering political organizations in the pre-independence period because of the way that these organizations defy definitions commonly used in the study of political entities in democratic states. I further argue that the study of pre-independence colonial politics should inform the study of contemporary democratic states since there exist analogous political organizations which do not fit easily within the contours of the nation-state unit of analysis.