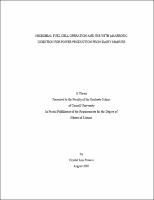 As the world's population approaches seven billion people, it is vital to find methods of livestock production, energy generation, and organic waste utilization that are sustainable for the future. Livestock manure has long been valued as a fertilizer and soil amendment, and more recently as a methane producer for heat and power via anaerobic digestion (AD). Microbial fuel cells (MFC) may offer an additional opportunity to gain value through direct electrical generation with little reduction in the manure?s soil building value, while concurrently reducing the manure's pollution potential. We demonstrate that simple lab-scale MFCs capable of electrical production can be used with dairy manure and the microorganisms needed for electrical generation are endogenously present. The MFCs had an average internal resistance of 136 ohms. The MFC system was operated with various raw manure concentrations (0-100 g/L COD at 20 oC), generating a maximum power density of 138 +- 19 mW/m2 (COD 100 g/L). Power production was proportional to manure strength over this COD range. The MFCs where tested at 20, 37, and 55 oC. Average total Coulombs (C) captured increased from 18.8+-1.3 to 40.5+-2.4 C, from 20 to 37 oC but fell to less than 1.42 C at 55 oC, indicating that the electrochemically active bacteria are possibly inhibited and killed at thermophillic temperatures. Coulombic efficiency also increased from 3.4+-1.2% to 5.8+-1.4% when the temperature was increased from 20 to 37 oC. MFCs were combined with AD. AD bottles were measured for total biogas production and composition during a 45 day period at 37 oC. Operating a MFC before AD did not have a statistically significant impact on the amount of biogas produced. However, the MFC operation did affect the timing and rate of biogas production for some of the samples. Biogas production reached a threshold of 5mL as many as 8 days sooner in the bottles that where first operated in a MFC. The maximum slope of the biogas curves was decreased by 55% from an average of 2.91 to 1.31 mL/day with prior operation in an MFC, indicating that the peak production rate was lower. The effect of AD digestion on the MFC performance was more significant with a 65% decrease in the total Coulombs captured when AD was completed prior to use in a MFC. To compare the two processes, the respective performance of the two processes was determined by Coulombic efficiency and energy captured. The MFCs reached a maximum of 7% Coulombic efficiency while the AD tests were all over 100% (indicating COD destruction was underestimated). Total energy capture for the MFCs was less than 1 Joule while with the AD tests it was 120-220 J. Both these measures indicate that AD is currently the more efficient process at converting biodegradable substrate into energy. However, with further research and development, MFCs show promise if applied in situations that fit their unique benefits, such as operation at temperatures and COD concentrations below that needed for AD. Examples include ambient temperature manure storage ponds and post-digestion substrates.