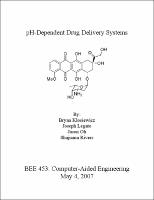 Gastric carcinoma, or stomach cancer, is a major disease in the world today. Although it only accounts for about 2% of all cancer cases in the United States, it is much more prevalent in nations such as Korea, Japan, Great Britain, South America, and Iceland. While the most common treatment for gastric carcinoma is surgery, there are chemotherapeutic alternatives including the application of doxorubicin, also known as Adriamycin?. However, as with nearly all chemotherapy drugs, doxorubicin causes dose-dependent toxicity that results in severe biological side effects and, potentially, death. Many of the adverse effects of doxorubicin may be attributed to the fact that it is normally administered intravenously; thus, although the drug?s target is the stomach, the doxorubicin is systemically rampant. Hence, we have developed a delivery system for doxorubicin that we hope will limit the drug?s action to the stomach alone. We begin with a means for encasing the doxorubicin inside two types of hydrogels whose diffusive properties vary depending on temperature and pH levels, such that diffusion may be maximized in the stomach and minimized at all other locations inside the gastrointestinal tract. This original design was modeled as a 1-D radial line to represent the spherical shape of the pill. After investigation, another design involving a hollowed out hemisphere was modeled and tested. Results comparison shows that the second design scheme is superior to the first both in outward drug flux and in the amount of drug able to be delivered. Ultimately, results of the study showed that pH-dependent drug release can be attained at a steady and reliable rate, with significantly greater rates of release inside the stomach. However, we were unable to attain a clinically adequate amount of total doxorubicin release with our model designs. Still, it may be possible to achieve medically useful results with pH-dependent drug delivery systems given certain technological improvements in the future.