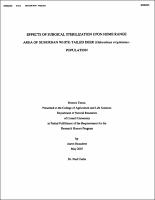 As white-tailed deer (Odocoileus virginianus) populations continue to increase in suburban environments, local governments are considering ways to manage herd abundance and associated conflicts. Sterilization is one possible non-lethal method for controlling herd density, but little is known about the effects of sterilization on the behavior of female deer in suburban areas. We compared home range areas for a sample of sterilized (treated) female deer with home range sizes of reproductively-active females (controls). Between January 2002 and March 2005, 61 deer were captured, radio-collared, and located weekly using radio-telemetry in the Village of Cayuga Heights, New York. Sixteen deer were surgically sterilized. Neither annual nor seasonal average home range areas were significantly different between the control and sterilized groups. In 2004, a subset of the study population (long-term resident deer present in both 2002 and 2004), did have significantly different annual average home range areas (F= 5.946, df = 1, P < 0.05). Control (27.7 ha) and sterilized (14.0 ha) long-term residents may have exhibited different home range use because of the behavior of control female deer caring for fawns during summer. The high site fidelity and survivorship of collared female deer indicates that sterilization could potentially have long-term effects, and may cause a slow population decline over several years. Continued resource utilization by sterilized deer would reduce the amount of resources available to reproductively-active immigrant deer.