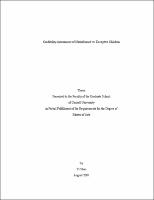 This is the first study to contrast how adults make credibility assessments about children who experienced a suggestive interview, children who had been coached to lie, and children who were telling the truth. Nine preschool children were interviewed about an event involving a minor infraction. Three of the children reported the truth, four were coached to lie, and two children reported misinformation as the result of a suggestive interview. Eighty-seven college students watched videotaped interviews of these nine children and assessed their credibility. Children who had experienced a suggestive interview were rated as credible as those who were telling the truth. Children who had been coached to lie were rated as less credible than the two groups of children. The results suggest that misleading information gets incorporated into children?s memory, thus arguing for a cognitive rather than social explanation of suggestibility. The implication for children's court testimony and jury decisions are discussed.