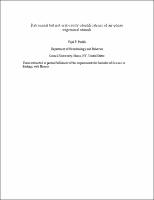 Single concentrations of six odorants (eugenol, heptyl alcohol, nonanal, 1-octanol, dl-menthol, valeric acid) were selected to be trigeminal stimuli, based upon previous studies done through anosmics (individuals that lack a functional olfactory system). The stimuli were presented in random order three time each in vapor-phase either retronasally or oral-cavity-only. They were identified on a digital computer by 20 subjects (ages 18 to 35, 9 females). Retronasal presentations were produced by inhaling via the mouth with a nose clip closing the nostrils, and then removing the nose clip and exhaling from the nose. Oral-cavity-only presentations were produced by inhalation via the mouth with a nose clip closing the nostrils, and exhalation from the mouth with the nose clip remaining in place. This study investigates if subjects could identify odorants when restricted to the oral-cavity-only using the same identifiers of the odorants when presented retronasally. RESULTS: Median percent retronasal correct identifications [correct identification terms are shown in brackets] were: eugenol, 100% [cloves or spice]; heptyl alcohol, 67% [cleaner]; nonanal, 58% [citrus or floral]; 1-octanol, 71% [citrus or cleaner]; dl-menthol, 100% [ointment or peppermint]; valeric acid, 67% [rancid or sweat]. Median percent correct oral-cavity-only identifications were all 0%, except for dl-menthol, for which percent correct oral-cavity-only median correct identification was 67%. A Friedman Non-Parametric ANOVA statistical analysis showed significant difference between odorants presented oral-cavity-only versus retronasal. Pairwise comparisons showed significant differences between odorants presented oral-cavity-only versus retronasal for all odorants except for dl-menthol. CONCLUSIONS: Many vapor-phase 'trigeminal' odorants can be identified only when access to the nasal cavity (retronasal) occurs, but substantial correct identification of vapor-phase dl-menthol also occurs when restricted to the oral cavity (oral-cavity-only). Odorants similar to dl-menthol may contribute to flavor from both the oral and nasal cavities.