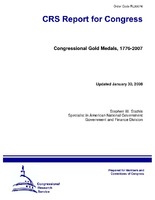 [Excerpt] Senators and Representatives are frequently asked to support or sponsor proposals recognizing historic events and outstanding achievements by individuals or institutions. Among the various forms of recognition that Congress bestows, the Congressional Gold Medal is often considered the most distinguished. Through this venerable tradition, the occasional commissioning of individually struck gold medals in its name, Congress has expressed public gratitude on behalf of the nation for distinguished contributions for more than two centuries. Since 1776, this award, which initially was bestowed on military leaders, has also been given to such diverse individuals as Sir Winston Churchill and Bob Hope, George Washington and Robert Frost, Joe Louis and Mother Teresa of Calcutta. Most recently, a Congressional Gold Medal was awarded to internationally recognized physician and surgeon Dr. Michael Ellis DeBakey. Members of Congress and their staff frequently ask questions concerning the nature, history, and contemporary application of the process for awarding Gold Medals. This report responds to congressional inquiries concerning this process, and includes a historical examination and chronological list of these awards. It is intended to assist Members of Congress and staff in their consideration of future Gold Medal proposals, and will be updated as Gold Medals are approved.