Apprehensions of Unauthorized Migrants Along the Southwest Border: Fact Sheet 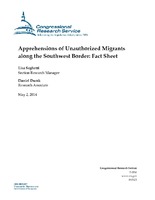