Afro-Latinos in Latin America and Considerations for U.S. Policy 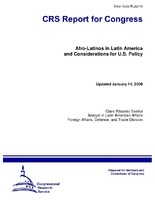 [Excerpt] During its second session, the 110th Congress is likely to maintain an interest in the situation of Afro-Latinos in Latin America, particularly the plight of Afro-Colombians affected by the armed conflict in Colombia. In recent years, people of African descent in the Spanish- and Portuguese-speaking nations of Latin America — also known as “Afro-Latinos” — have been pushing for increased rights and representation. Afro-Latinos comprise some 150 million of the region’s 540 million total population, and, along with women and indigenous populations, are among the poorest, most marginalized groups in the region. Afro- Latinos have formed groups that, with the help of international organizations, are seeking political representation, human rights protection, land rights, and greater social and economic rights and benefits. Improvement in the status of Afro-Latinos could be difficult and contentious, however, depending on the circumstances of the Afro-descendant populations in each country. Assisting Afro-Latinos has never been a primary U.S. foreign policy objective, although a number of foreign aid programs benefit Afro-Latino populations. While some foreign aid is specifically targeted towards Afro-Latinos, most is distributed broadly through programs aimed at helping all marginalized populations. Some Members may support increasing U.S. assistance to Afro-Latinos, while others may resist, particularly given the limited amount of development assistance available for Latin America. In the 110th Congress, there are several bills with provisions related to Afro-Latinos. The Consolidated Appropriations Act, FY2008 (H.R. 2764/P.L. 110-161), requires the State Department to certify that the Colombian military is not violating the land and property rights of Afro-Colombians or the indigenous. It also prohibits the use of Andean Counterdrug funds for investment in oil palm development if it causes displacement or environmental damage (as it has in many Afro-Colombian communities). In the explanatory statement to the Consolidated Appropriations Act, the conferees stipulate that up to $15 million in alternative development assistance to Colombia may be provided to Afro-Colombian and indigenous communities. On July 11, 2007, the House passed H.Res 426 (McGovern), recognizing 2007 as the year of the rights of internally displaced persons (including Afro-Colombians) in Colombia and offering U.S. support to programs that seek to assist and protect them. Another resolution, H.Res. 618 (Payne), recognizing the importance of addressing the plight of Afro-Colombians, was introduced on August 3, 2007. In addition to considering this and other legislation with provisions related to Afro-Latinos, the 110th Congress may discuss the situation of Afro-Colombians during its consideration of the U.S.-Colombia Trade Promotion Agreement. This report will be updated as legislative action warrants.