William J. Hamilton, Jr. of Cornell, The Man and the Myth 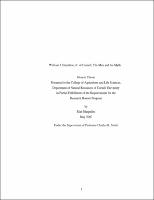 William J. Hamilton, Jr. was a prominent Professor of Mammalogy who was beloved by his students and peers. Bill entered Cornell as an undergraduate in 1920 and stayed until his death in 1990. Professor Hamilton helped found the Department of Conservation in 1947, which was the precursor to the Department of Natural Resources. During his 33 years as a professor, he directed 60 graduate students and was on the thesis committee of 150. Bill was a meticulous note taker, and encouraged his students to do the same. He was a great naturalist whose specialty in mammalogy only exceeded his knowledge in other fields of natural history. Throughout his life he supported the study of ?Backyard Biology? ? the belief that scientific wonders could be discovered at your own doorstep. He was an avid gardener who introduced many garden species to New York State. ?Wild Bill?, as he was known, was famous for his tall tales and practical jokes. Oftentimes, this jesting was focused on teaching his students a lesson, or exposing the faults in that person?s knowledge. His academic honors included publishing over 230 scholarly articles, serving as the president of the American Society of Mammalogists and as the president of the Ecological Society of America. His textbook, Mammals of Eastern North America, became the textbook of choice for decades and to this day has remained a critical resource for students. Through personal interviews, archival research and contact with the Hamilton family, the author has created an abbreviated biography.