Understanding the Economy: Long-Term Unemployment in the African American Community 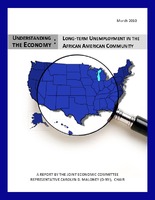