Assessing the Costs of Group Living: Comparing Metabolic Physiology and Growth in Social and Solitary Spiders 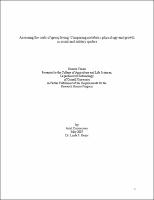 Sociality in arachnids is extremely rare though well documented for the few cases that exist. However, no research to date has examined the metabolic and growth characteristics associated with social behavior. Delena cancerides is a social huntsman spider that closely overlaps in distribution with several closely related species of solitary huntsmen, providing a unique opportunity for comparison. I compared the metabolic rate of D. cancerides to other species of solitary huntsman using a closed-system respirometer. I also compared the growth, survival and molting frequency of D. cancerides spiderlings in solo and group treatments to those of solitary huntsman species. Delena cancerides had a significantly lower mass-specific metabolic rate than all other species to which it was compared. This is explained in the context of reduced food availability per individual for prolonged periods of time due to sharing. Delena cancerides spiderlings did not differ from other species when housed alone, but grew significantly more in group environments than did solitary species. Mortality was lowest for D. cancerides living in groups than for any other species living in groups. There was no difference for any species in molting patterns between solo and group treatments. D. cancerides molted consistently earlier and more often than the species to which it was compared. The consequences of these findings are discussed in the context of prey-sharing and avoidance of cannibalism.