Investigations into Colony Identity in a Social Spider: Does Delena cancerides Utilize Chemical Cues to Distinguish Between Kin and Non-kin? 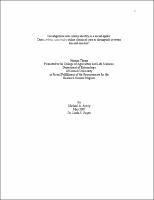 The presence of recognition systems, though oft-studied and well documented in the eusocial insects, has been largely unreported among the spiders. Most spider species are solitary and cannibalistic, such that kin recognition is not particularly advantageous, and most social spiders do not apparently differentiate between relatives and non-relatives. However, Delena cancerides, a social huntsman spider from southern Australia, is the only social spider known to respond aggressively to introduced non-relatives and has been shown to preferentially consume non-kin in starvation experiments. It is hypothesized that chemical cues mediate the differentiation of related colony mates from non-colony mates, and that D. cancerides prefer exposure to cues derived from their natal colony to those derived from an alien colony. I used a three choice olfactometer to implement an olfactory preference assay with D. cancerides, using the degree of exploration in the olfactometer to divide trials into three analyzable groups. Movement within the olfactometer during trials was highly non-random. Spiders in the group characterized by exploration of both the same-colony and foreign-colony stimuli settled with their same-colony stimulus at the end of the trial significantly more than predicted by chance. However, none of the three trial groups spent significantly more time in the presence of a same-colony stimulus than predicted by random motion. Spiders spent significantly more time in the presence of conspecific stimuli, from either same- or foreign-colonies, than predicted by random motion in two of three trial groups, suggesting that recognition of conspecifics and the tendency to aggregate is also mediated chemically.