Group Incentives and Pay Satisfaction: Understanding the Relationship Through an Identity Theory Perspective 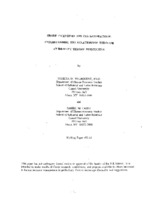 The goal of this paper is to develop a conceptual model based on identity theory to specify the relationship between group incentives and pay satisfaction. Pay satisfaction, as currently measured, does not include items that directly assess group-based rewards, therefore, any changes in pay satisfaction associated with group incentive implementation would be the result of some spillover effect. Identity theory is employed to model this effect by delineating how group incentives tap salient work-related roles; the theory also has implications for various behavioral consequences. The research described in this paper tests two hypotheses derived from the conceptual model. These hypotheses are tested in two quasi-experimental field studies conducted in a high technology firm and a consumer products company that both implemented gain sharing programs. The findings indicate that gainsharing plans can be viewed as either a benefit or as part of individual pay based on the ability of the incentive plan to activate salient work roles.