TURKISH ISLAMIC CLAIMS MAKING IN GERMANY: MILLI GORUS IN BETWEEN LOCAL AND GLOBAL 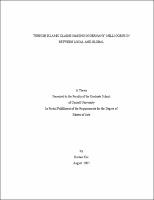 Recent academic work on the powers of the nation state has argued that nation state's position as the predominant unit of social organization is being diminished from outside by forces of globalization and through the shift of power from the national to the supra and transnational levels. It is also argued that the nation state's legitimacy, authority and integrative capacities are weakened form within by an increasing number of claims for special group rights emphasizing cultural difference. Not surprisingly, migrants and ethnic minorities have been at the forefront of these claims; arguably contributing through their claims making both to the external erosion of sovereignty and to internal cultural differentiation. Post-nationalists argue that citizenship and welfare rights possessed and otherwise demanded by non-citizens contribute to the erosion and transcending of the frontiers of nation-states while migrant communities increasingly take on the character of transnational communities taking advantage of transnational political opportunities. Multiculturalists, in turn, argue that the liberal nation state is challenged when migrant minorities question the conception of a unified undifferentiated citizenship by putting forward demands for special group rights and for the recognition of cultural difference. A third strand of thought has emerged in response to these claims from supra-nationalists and multiculturalists emphasizing the continuing importance of the nation-state particularly in shaping migrant experience in general and migrant claims making in particular. Scholars have analyzed the citizenship configurations of nation-states as the explanatory variable in explaining different strategies in dealing with ethnic difference and the different manifestations of these strategies in different countries. In contrast to the above summarized polemical opposition of nation-state bound approaches on the one hand and an unbounded supra-nationalism on the other, I argue that host/home country influences, extra nation-state influences and group ideological/religious orientations affect migrant claims making through mechanisms like attribution of opportunity or threat and internalization. To specify the role of these factors in influencing migrant claims making and the inner workings of these mechanisms, I analyzed Milli Gorus Germany claims through content analyses of organizational media and observed changes and trends in the nature of this claims making. I also documented Milli Gorus Germany's organizational ties and conducted open-ended interviews with organization members to understand what factors have influenced these trends and changes. My findings show that understanding migrant claims making necessitates long term case study analyses of the claims making strategies of particular migrant groups. While national citizenship models do have an influence on the nature of migrant claims making in a particular country, claims making strategies of migrant groups are also influenced by home country, supra/transnational and intra-group changes. First, my empirical analysis shows that Milli Gorus Germany claims emerge as an outcome of broad change processes (national or international) which are attributed as threats and opportunities depending on the ideological/religious identification of group. Second, I show that extra-nation state pressures and events can unexpectedly lead to a very domesticated claims making due to internalization which I claim is dependant on an already emerging host-country orientation within the immigrant group. I argue that my focus on dynamic processes and mechanisms linking the local and global not only helps us to trace and explain changes in the nature of Milli Gorus Germany claims making over time, but it also enables us to understand the interaction of the local and the global. The global doesn't always rule the local and the local doesn't always rule the global. They interact in previously undetermined ways to affect migrant claims making through processes like attribution of threat and opportunity and internalization and create different claims making strategies over time and between different groups.