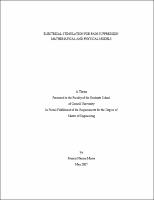 Finite element models of increasing complexity were generated in the ANSYS finite element modeling program to determine the electric field and current properties in the body as a result of the transcutaneous electric nerve stimulation (TENS) device. The initial models consist of one-, two-, and three-layer structures, and the final model was a 7,415 node two-dimensional model of the human arm. To validate the ANSYS calculations, one-, two-, and three-layer phantom models were developed using agar, deionized (DI) water, and sodium chloride in varying concentrations. A summing amplifier was built to combine multiple stimulating waveforms at different frequencies from two function generators at two frequencies F1 and F2. Current measurements from the phantom models were compared to ANSYS calculations on corresponding finite element models. The ANSYS program was validated for modeling of single-layer models. Multiple layers of gels of different resistivity exhibited ion leaching problems which made them unsuitable as phantom models. It is necessary, therefore, to develop and validate an alternative phantom model for modeling electric field and current properties of multi-layer systems. A technique was developed for transforming cross-sectional images of body parts into mesh diagrams suitable use in ANSYS. Body images from ?The Visible Human Project? were taken and processed such that eight different tissue types and their location could be identified. Electrical properties were determined for muscle, skin, fat, cortical and cancellous bone, blood, connective tissue, and nervous tissue for use in the ANSYS simulation models. A cross-section of a male arm was processed and analyzed.