MOLECULAR ASSESSMENT OF BTH TREATMENT IN PETUNIA, POTATO AND TOMATO 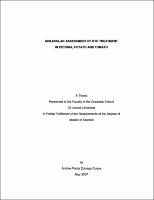 Induced resistance by chemicals such as benzothiadiazole BTH (Syngenta Inc) mimics the biological activation of Systemic Acquired Resistance (SAR) by necrogenic pathogens, taking the place of salicylic acid (SA) in the SAR signal pathway, inducing the same molecular markers and range of resistance. Previous work in our laboratory found that BTH activates resistance against late blight caused by P. infestans, on petunias and tomatoes while it did not activate resistance against the same pathogen on potatoes, suggesting that the spectra of resistance activated by BTH are very crop and pathogen specific. My goal was to understand the molecular mechanism by which BTH mimics the SAR response and further understanding why BTH works in some plants and not others. To address this question I used microarray technology to identify the genes expressed in response to BTH in petunias, tomatoes and potatoes. I selected three candidate genes (cysteine protease, acidic chitinase and PR1-a) to characterize further by silencing using Virus Induced Gene Silencing (VIGS). My hypothesis was that silencing of these genes will reduce the resistance response in plants observed after BTH treatment against P. infestans. However, silencing of cysteine protease, PR1-a or acidic chitinase II individually did not reduce the effect of BTH on plants. The lack of phenotype after silencing PR1-a supports previous conclusions from our lab that partial resistance to P. infestans in tomato is not dependent of the SA pathway.