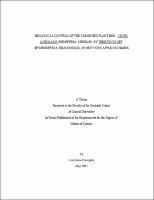 Lygus lineolaris is a pest of many economically important crops. While the species comprising the Peristenus pallipes complex are native parasitoids of L. lineolaris, they do not provide adequate biological control of L. lineolaris. As a result, the European parasitoid, Peristenus digoneutis, was introduced in forage alfalfa. Peristenus digoneutis successfully dispersed from forage alfalfa to strawberries, suggesting that P. digoneutis may disperse into other high value crops. In apples, L. lineolaris feeding causes puncture wounds, scabs or cat facing on the fruit. The success of a classical biological control introduction is dependent on both monetary and ecological costs and benefits. The dispersal and persistence of P. digoneutis into multiple crops is necessary for monetary benefit. Furthermore, if pesticides disrupt classical biological control no monetary gain can be made. In addition, an ecological cost of classical biological control is displacement of native species. The objectives of this study are to-1) establish the presence of the introduced parasitoid, Peristenus digoneutis, in New York apple orchards, 2) evaluate changes in rates of parasitism of L. lineolaris by native and introduced Peristenus spp. since the initial dispersal of P. digoneutis into western New York, 3) determine how four pesticide regimes- standard, reduced risk, organic and abandoned orchards- affect Peristenus spp. parasitism. During this two year study L. lineolaris were collected from New York apple orchards treated with standard, reduced risk, organic insecticides. This is the first record of P. digoneutis parasitizing L. lineolaris in apple orchards. When compared to rates of parasitism collected from strawberries in 1999 there is an increase in the total L. lineolaris parasitism by Peristenus spp. in western New York. Additionally, there was a reduced rate of parasitism by native parasitoids in the P. pallipes complex, suggesting that P. digoneutis may be competitively displacing natives. Insecticide treatment had a significant effect on rates of Peristenus spp. parasitism. When compared to standard insecticide regimens there was significantly higher parasitism in reduced risk when compared with standard orchards. Conversely, there was significantly less parasitism in organic orchards when compared to standard orchards.