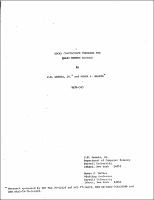 This paper presents generalizations of the two results which have been useful for analyzing methods of the form $x_{k+1} = x_{k} - B_{k}^{-1}F(x_{k})$. The bounded deterioration theorem of Broyden-Dennis-More is generalized to show that if \{$B_{k}$\} or \{$B_{k}^{-1}$\} is of bounded deterioration as a sequence of approximants to some $B_{*}$ or $B_{*}^{-1}$ then the iteration above has the same local convergence properties and arbitrarily nearly the same linear rate as would be achieved by the stationary iteration function which uses $B_{k} = B_{*}$. The characterization theorem for superlinear convergence given by Dennis-More is then generalized to give conditions under which the rates are the same. In the case when $B_{*} = F'(x_{*})$, these results reduce to those already known.