The Small-World Phenomenon: An Algorithmic Perspective 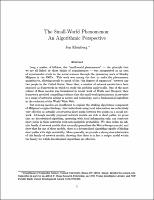 Long a matter of folklore, the ``small-world phenomenon'' --- the principle that we are all linked by short chains of acquaintances --- was inaugurated as an area of experimental study in the social sciences through the pioneering work of Stanley Milgram in the 1960's. This work was among the first to make the phenomenon quantitative, allowing people to speak of the ``six degrees of separation'' between any two people in the United States. Since then, a number of network models have been proposed as frameworks in which to study the problem analytically. One of the most refined of these models was formulated in recent work of Watts and Strogatz; their framework provided compelling evidence that the small-world phenomenon is pervasive in a range of networks arising in nature and technology, and a fundamental ingredient in the evolution of the World Wide Web. But existing models are insufficient to explain the striking algorithmic component of Milgram's original findings: that individuals using local information are collectively very effective at actually constructing short paths between two points in a social network. Although recently proposed network models are rich in short paths, we prove that no decentralized algorithm, operating with local information only, can construct short paths in these networks with non-negligible probability. We then define an infinite family of network models that naturally generalizes the Watts-Strogatz model, and show that for one of these models, there is a decentralized algorithm capable of finding short paths with high probability. More generally, we provide a strong characterization of this family of network models, showing that there is in fact a unique model within the family for which decentralized algorithms are effective.