Public Education in Buffalo and the Region 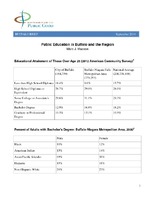 The biggest problem facing Buffalo’s public schools is the fact that many students live in poverty, while at the same time being segregated from students from wealthier communities who tend to enjoy better educational opportunities and rates of academic success. Buffalo shares many of the problems of large cities in the United States, largely caused by high concentrations of poverty in urban areas. In 2009, about 59% of students served by urban school districts located in the metropolitan areas of the 50 largest U.S. cities graduated, compared with 77% in nearby suburban communities. In Western New York, all of Buffalo Business First’s highest ranked public high schools except City Honors are located in affluent suburbs: Williamsville, East Aurora, Clarence, Lewiston-Porter, etc. The thirteen lowest ranked high schools are in the City of Buffalo.