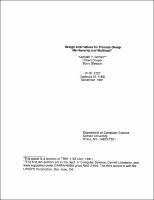 Process groups are a natural tool for distributed programming, and are increasingly important in distributed computing environments. However, there is little agreement on the most appropriate semantics for process group membership and group communication. These issues are of special importance in the Isis system, a toolkit for distributed programming [Bir91]. Isis supports several styles of process group, and a collection of group communication protocols spanning a range of atomicity and ordering properties. This flexibility makes Isis adaptable to a variety of applications, but is also a source of complexity that limits performance. This paper reports on a new architecture that arose from an effort to simplify Isis process group semantics. Our findings include a refined notion of how the clients of a group should be treated, what the properties of a multicast primitive should be when systems contain large numbers of overlapping groups, and a new construct called the causality domain. As an illustration, we apply the architecture to the problem of converting processes into fault-tolerant process groups in a manner that is "transparent" to other processes in the system. A system based on this architecture is now being implemented in collaboration with the Chorus and Mach projects. Keywords: distributed computing, fault-tolerance, Isis, process groups, virtual synchrony, causal multicast, atomic broadcast.