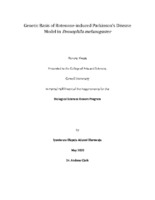 Parkinson’s disease (PD) is a neurological disorder that exists in sporadic and familial forms and causes the death of dopamine-producing neurons in humans. Rotenone, a pesticide, can be used to induce a model of sporadic PD in Drosophila melanogaster. The genetic pathogenesis of PD is still being determined in both humans and D. melanogaster. Conducting a genome-wide association study on the genetic variation of D. melanogaster from the Drosophila Genetic Reference Panel (DGRP) with rotenone-induced PD uncovered a set of candidate genes that alter sensitivity to the pesticide. Many of these genes point to possibly important roles of natural variation in the Fibroblast Growth Factor (FGF) Pathway and microtubule synthesis. As microtubule is central to the transport of dopamine in D. melanogaster, these findings suggest a possible explanation of sporadic PD in humans based on genetic and environmental interactions.