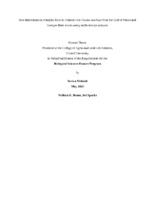 Atlantic Cod (Gadus morhua) has historically been an important commercial and recreational fish species in New England. There are two main stocks: the Gulf of Maine (GOM) and Georges Bank (GB) which are considered inshore and offshore, respectively. Stable isotope analysis of 15N was conducted on tissues to gain insights into the trophic level and diet of the fish. This study was conducted to test the hypothesis that stable isotope analysis of different tissues would significantly differ by stock, and that the size of the fish would predict the trophic level the fish was feeding at. All fish examined were from the GOM or GB stocks; we used two location parameters (stock and statistical area) and tested their interaction with δ15N separately. Three different tissues were used for isotope analysis: caudal fin clips, muscle, and otoliths. By analyzing three statistical models, we found that the more specific location parameter, statistical area, was part of a significant interaction with total length and tissue type that influences δ15N; stock did not have a significant influence on any relationship. Total length by itself was not a significant variable affecting δ15N; other studies have confirmed it is more indicative of food web interactions than species trophic level. Testing between tissue type showed that otolith δ15N measurements were significantly different from fin clips and muscle tissue; this could have impacts on archaeological studies. The baseline of variation for the δ15N of each tissue type was determined, but further validation with more samples is needed.