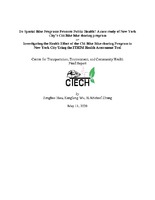 Bike travel is often considered as a healthy and environmentally friendly mode of travel and promoted by cities. Bike sharing, as a bike usage boosting program, invigorates these advantages. However, as usage of it rises, so do the adverse effects on cyclists’ physical well-being, such as hazardous air exposure and bicycle involved accidents. The net health benefits of bike-sharing programs are therefore not clear cut and are worthy of studying case by case. This paper focuses on the Citi Bike Bike-sharing program in New York City. We evaluate the health effect of it using a modified Integrated Transport Health Impact Model (ITHIM) by assessing and comparing the risks of two proposed scenarios: with-Citi bike scenario (baseline) and without-Citi bike scenario (hypothetical). The baseline scenario corresponds to the actual traffic and health condition in 2017, while we split the Citi Bike trips to other modes according to the NYC travel survey data to construct the hypothetical scenario. For each scenario, we investigate the overall health effects of the Citi Bike from three pathways: physical activity, hazardous air exposure, and road traffic injuries. The result indicates that the implementation of Citi Bike plays a positive role in improving the public health. By conducting a sensitivity study, we delve into the potential benefits of the Citi Bike under some possible policy outcomes. Finally, we discuss the strength and limitation of the study, and provide the future study directions.