Cultural Intelligence and Its Relations to Cognitive Abilities and Personality Traits 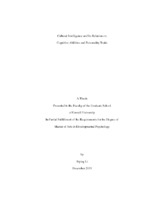