COMPUTATIONS, MODELLING AND THEORIES IN A FEW PHYSICS PROBLEMS 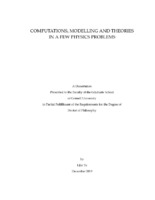 In this thesis, I discuss three projects that I participated in during my Ph.D.: electron correlation in two-electron systems, modeling coherent two-dimensional heterostructures, and the design of potential energy surfaces with magnetic interactions. Electron correlation plays a crucial role in many-body systems. In this first project, we studied electron correlation in some of the simplest electronic systems, helium-like atoms. In particular, we are interested in how electron correlation affects atomic stability. We implemented the Hartree-Fock approximation and radial correlation limit to investigate different degrees of correlation in such systems, and found that a number of critical behaviors, like energy, expectation values, and density near the binding limit, are heavily influenced by electron correlation in unexpected and interesting manners. In this second project, we studied 2-dimensional heterostructures that were produced using two different transition metal dichalcogenides with coherent lattice constants. We modeled the energetics in these superlattices by combining a macroscopic elastic model with a microscopic van der Waals interaction model, and the results were in good agreement with experimental measurements. In particular, we carried out structural optimizations to successfully explain that the coherence in these superlattices is primarily governed by angular interactions in the transition metal dichalcogenide layers. Programmable materials are the building blocks of soft robotics. How to accurately control the interactions between different components of a robot in a robust manner still remains a challenging issue. In this third project, we utilized magnetic interactions as the design toolbox for generating desired potential energy patterns, with a particular focus on folding 2D membranes to 3D structures. We demonstrated that in two configurations, face-to-face and hinge, we are able to observe a large variation of the optimal equilibrium distances and angles with different magnetic arrays. Furthermore, we have developed an efficient inverse solver that can provide magnetic patterns that reproduce a targeted potential energy surface.