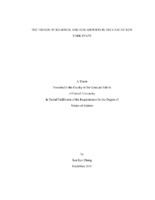 Airports have been an important topic of recent study. This research examines trends of small to hub airports in New York State and attempts to understand the impetus for sustaining these airports. This thesis fills the literature gap regarding airport activity and accessibility by vehicle. It contributes to a broader discussion about the health of regional airports in a New York State context. The main argument is that small and regional airports struggle to retain flight commercial services. Shadowed by the influence of hubs, small airports often have difficulties maintaining their operations, which may signal either the end of regional airports or the beginning of rebranded, or re-strategized, regional airports. The thesis aims to demonstrate applications of regional science by surveying issues that trouble airport managements and their local communities at the county scale in New York State. The study has found the trends from 2000 through 2014 that the non-primary and small primary airports in New York State have encountered a decrease in their enplanements in contrast to a slight increase in the large primary airports’ enplanements. The results highlight that the small primary airports have the lowest number of enplanements, compared to the other airport groups, when accounting for the determinants (vehicle, median household income, population density, primary, and catchment area).