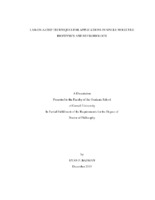 “Lab-on-a-chip” technology refers to the concept of shrinking normally macroscopic laboratory instruments down to the micrometer or nanometer scale, with “on-chip” specifically normally referring to silicon chip-based devices (including glass, a.k.a silicon dioxide). This thesis has two lab-on-a-chip components. The first part is developing new lab-on-a-chip technology. Optical tweezers are typically room-sized optics setups designed for precision (nanometer-scale) manipulation of single molecules. On-chip high-throughput optical tweezers (analogous to conveyor belts) were fabricated and optimized on coin-sized silicon-based devices. For the second part, existing lab-on-a-chip technology was used to conduct a toxicology study. Specifically planar microelectrode arrays were used to characterize the toxicity of next generation nanomedicine nanoparticles. Historical electrode arrays are large devices implanted into an animal brain, but microelectrode arrays are small chip-based arrays that can directly probe single neurons plated in culture in the microelectrode dish (neuron culture is similar to a miniature two-dimensional “brain”) , thus shrinking the electrode array technology down to the microscale.