Emerging from the Dark Ages: An Analysis of Clouds on Titan 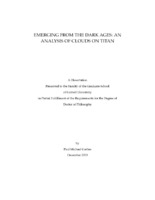 In many ways, Titan is the most Earth-like body in the solar system with large dunes, standing bodies of liquid, clouds, mountains, rivers, and precipitation. Titan is the only other body in the solar system that has an active hydrologic cycle, though in place of water as on Earth, methane acts as the primary volatile. In this regard, Titan acts as one of the most exciting and viable bodies for comparative planetology, going as far as to provide insights into what conditions may have been like on early Earth when life evolved or what the final state of Earth's hydrologic cycle may be like. Herein, we present a study of the hydrology of Titan from meso- to global scales. This is done primarily through observations and modelling the evolution of clouds in Titan's atmosphere to understand their composition, frequency, and dynamics. Clouds were regularly observed throughout the Cassini mission, which orbited around Saturn from 2004-2017, and continue to be observed through ground based observations - leveraging adaptive optics and large aperture observatories to resolve the disk of Titan. Herein, we present observations that cover a wide range of spatial and temporal scales in order to understand Titan's hydrology, beginning with a discussion of Titan's topography a critical parameter in understanding not only Titan's atmosphere, but for interpreting results from observations and modelling. We will then move to a discussion of observations in the Cassini VIMS dataset, starting with an in-depth analysis of single cloud systems to diagnose their formation and constrain the associated dynamics of Titan's atmosphere, leveraging the new topography. Next, we will move to a broader analysis of all clouds observed in the VIMS dataset. Though not as in-depth on a cloud-by-cloud basis, this more encompassing analysis offers the context of cloud dynamics and characteristics on seasonal timescales, providing valuable comparisons to general circulation models of Titan's meteorology. We will then present the results of on an ongoing ground based campaign to observe clouds and weather on Titan. This campaign will ensure the ongoing monitoring of Titan over an entire season. Finally, we end with a discussion of the transmission of Titan's atmosphere, in support of future missions. Combined the analysis presented herein provides a rich progression in our understanding into the formation of clouds on Titan and the characteristics of Titan's meteorology. They offer the most in depth analysis of Titan's hydrology to date and provide critical comparisons to general circulation models as well as context for future comparisons with continued monitoring of Titan's weather. We find that Titan's hydrology is richly complex and provides direct comparisons with terrestrial meteorology, offering insights into weather here on Earth as well as allowing for comparisons to weather on distant worlds. However, the findings presented herein only offer a small glimpse into understanding the dynamics of Titan's atmosphere. Many questions remain unanswered about the dynamics that drive cloud formation, the true role of topography, or how Titan's weather will evolve through an as-of-yet unobserved season. Only continued monitoring of Titan's weather, now only possible from Earth, will ensure that these questions are answered. The analysis presented herein and the combination of both ground based and space based observations will hopefully provide the context necessary for interpreting the next generation of observations.