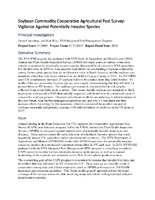 The NYS IPM program has partnered with NYS Dept. of Agriculture and Markets and USDA Animal and Plant Health Inspection Service (APHIS) for many years on various commodity surveys to monitor for potentially invasive species that would be of concern to NYS agriculture. For the first time, in 2019 we were asked to lead efforts on coordinating a soybean commodity survey for two moth species that are not known to exist in North America, and the soybean cyst nematode which has only been confirmed in one field in Cayuga County in 2016. Six NYS IPM and CCE collaborators surveyed 25 soybean fields in 16 counties from May until October. No moths of the two potentially invasive species were caught, demonstrating that they still aren’t a present threat to NY farmers. The soybean cyst nematode was identified in soil samples collected from seven fields in six counties. This means that the soybean cyst nematode is likely much more widespread in NYS than initially suspected, and should now be considered a pest of concern for soybean growers. Outreach and education efforts are underway to inform farmers of this new threat, what the best management practices are, and why it’s important that they increase efforts for testing for this nematode, which is considered the number one pest of soybeans nationally and globally, causing >109 million bushels of yield loss in the US alone in 2017.