Nationalizing the Diaspora Identity in the China Rising Century 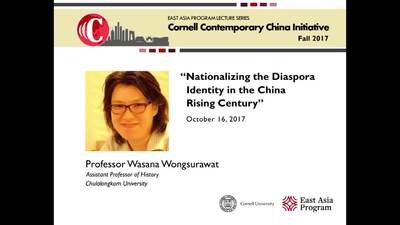 Wasana Wongsurat, Assistant Professor of History, Chulalongkorn University - The status of the ethnic Chinese in Thailand has seen enormous transformations over the past thirty years. From a severely persecuted minority amidst the Red Scare of the Cold War era, to the leading royalist nationalist business alliance of the conservative ruling class, to becoming the vanguard of Sino-Thai economic partnership in the age of One Belt One Road. The representation of Chinese-ness of the ethnic Chinese communities in Thailand have also been markedly transformed from the end of the Cold War era to the China Rising century. Ethnic Chinese museums have gone from the hyper-royalist Yaowaraj Heritage Center in Bangkok Chinatown to the business oriented and overtly pro-PRC Confucius Museum in the Northeastern red-shirt-capital of Udon Thani. The enormous influx of Mainland Chinese since the dawn of the new millennium has also completely transformed the landscape of Thai tourism and the marketing of Thai identity. Diaspora Chinese cultural heritage has overtaken traditional Hindu-Buddhist ones in some major tourist destinations. The province of Suphanburi, which had been the heartland of Dvaravati Hindu-Buddhist Thai-ness through much of the 20th century, is one major example. The old Hindu City Pillar Shrine had been renovated as a Chinese-style shrine completed with a gigantic dragon museum and a so-called traditional Chinese village within its grounds. These phenomena not only clearly reflect a shifting stance of the Thai ruling powers from the Thai-US alliance during the Cold War to a Thai-PRC alliance in the post-democratic era, but also suggest a fundamental change in the identity of ethnic Chinese Communities in Mainland Southeast Asia away from localized dialect groups to a more unified nationally identified as socio-cultural extensions of the rising Chinese empire of the 21st century.