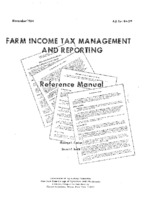 Recent Legislation Tax Reform Act of 1984 contains hundreds of provisions, some of which will affect farm in 1984 and future years. The last tax reduction from ERTA of 1981 becomes effective in 1984. Indexing will affect tax liability beginning in 1985. The 1984 Act requires the Secretary of the Treasury to conduct a study of replacing the individual income tax and the corporate income tax with an alternative tax system. The alternative tax systems to be studied are a simplified income tax based on gross income, a consumption tax, a consumption based tax, and broadening of the base and of the rates. The study shall also include tax shelters and how impact on the equity of the tax system. A report on the study is to be made by December 31, 1984. Future Legislation Our crystal ball is no better than yours. However, the prospect of continuing large federal deficits and perceived inequities in the tax system suggest that a combination of spending cuts and tax changes will be made. The indexing of brackets scheduled to take place in 1985 would seem to be an easy target. 1984 Farm Incomes Dairy farm incomes in 1984 generally will be lower than in 1983. January through August operating receipts less operating expenses on 62 CAMIS dairy farms were down 10 percent per farm and 13 percent per cow from year earlier levels. During the last four months of 1984, lower feed prices compared to year earlier levels and some strength in milk prices compared to the first eight months of the year will moderate the drop in net incomes compared to 1983. Grain prices were high early in 1984 due to the effects of PIK and dry weather in 1983. Prices for the 1984 corn crop will be well below those for the 1983 crop. Incomes of grain farmers in 1984 will depend to a large extent on timing of sales of their 1983 crops and PIK corn and 1984 crops. Many grape farmers will have lower incomes in 1984 than in 1983 due to lower prices. For some, 1984 incomes will be drastically lower because of loss of contracts for their 1984 crops. Prices for the 1983 apple crop, some of which was sold in 1984, were above year earlier levels. Revenues for the 1984 crop are likely to be about the same as for the 1983 crop. Egg prices in the first half of 1984 were well above year earlier levels but will be below year earlier levels in the last half. In general, 1984 net incomes of egg producers will be above 1983 levels. Net incomes of hog and beef producers in 1984 will not differ much from 1983. There is likely to be potential for tax savings by either carryover or carryback of net operating losses, depending on the specific situation.