On the Representation and Manipulation of Rigid Solids 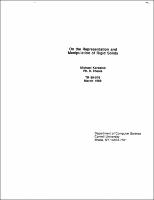